Chanting “Free China” and “No more lockdowns,” more than a hundred people rallied in Harvard Yard on Tuesday afternoon in solidarity with demonstrators in China protesting the country’s strict Covid-19 restrictions.

Protests erupted across China against the country’s “zero-Covid” policy over the weekend after a deadly fire in an apartment building killed 10 people on Thursday. The blaze occurred in Urumqi, the capital of China’s Xinjiang region, where stringent lockdowns have kept many residents confined to their homes for several months. Many who took to the streets in China suspected the lockdown rules may have contributed to the deaths in the fire.

Attendees sang “Do You Hear the People Sing?” from the musical “Les Misérables” and the Chinese national anthem in between chants of “We don’t want dictatorship, but elections” and “Hey hey, ho ho! ‘Zero Covid’ must go.”

George Yean, a Harvard graduate student studying government, said he attended the rally to support those protesting back home, saying “this is probably the only thing we can do” as students living outside of China.

“My basic reason is to show my solidarity with China’s freedom-seekers even though they probably don’t represent the majority of Chinese people,” Yean said. “But everything is starting from a tiny portion of the population, so that’s why I feel I am morally obligated to join them even though I’m staying overseas right now.” 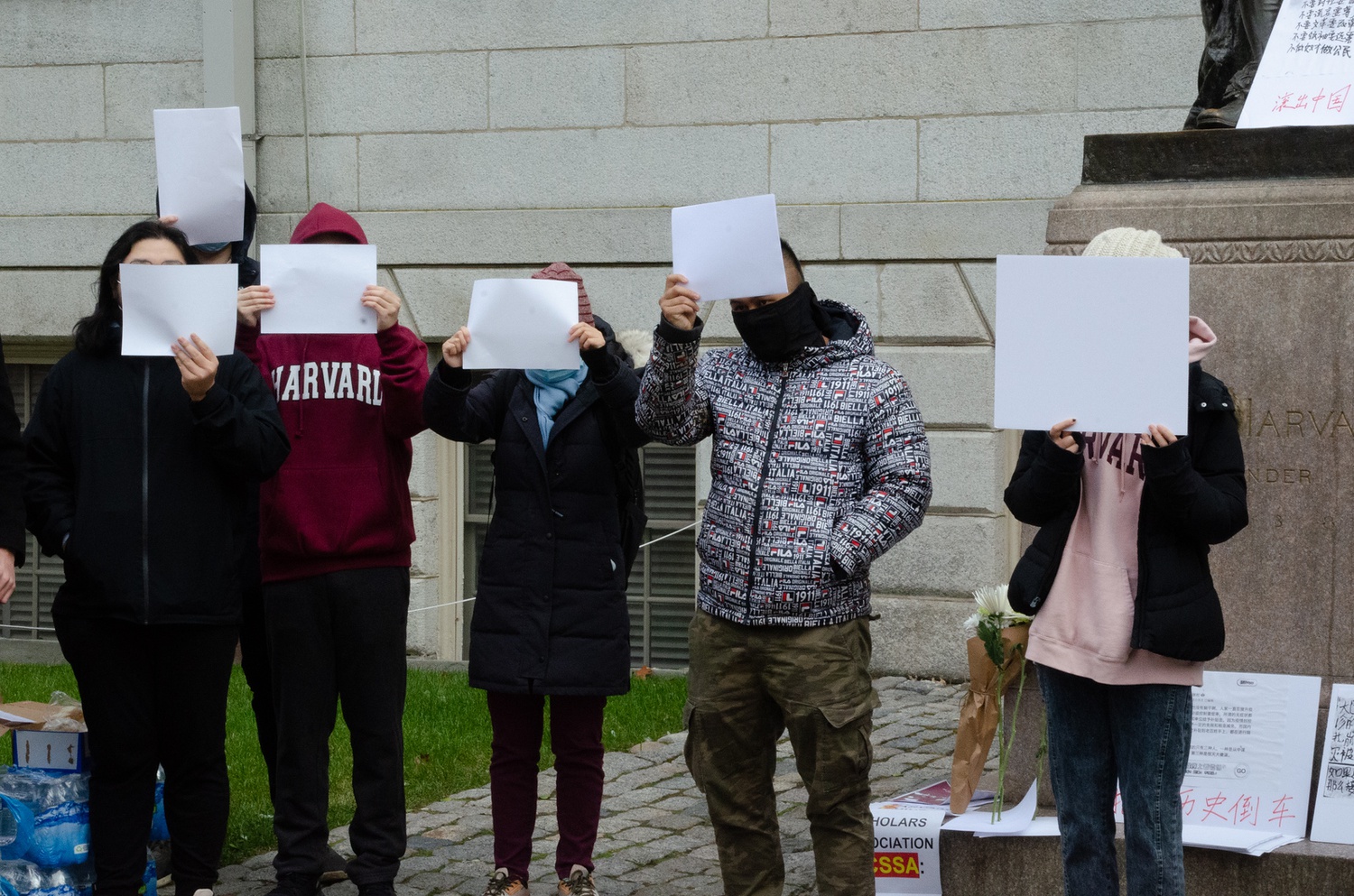 Demonstrators covered their faces with white sheets of paper during a protest against the Chinese government’s handling of Covid-19 on Tuesday. By Joey Huang

Tammy C.-T. Lan, a graduate student from Taiwan, said she attended the protest to support the relaxation of Covid-19 restrictions and to “stop the censorship of how many people are actually dying.”

Cosette T.-H. Wu ’25 said she attended the protest to support Chinese citizens in their quest for freedom.

“I think it’s less like I have specific demands about the situation in China and more that I think that the Chinese people should be able to make the demands that they want and see the change that they want to see,” Wu said.

Western coverage of the unrest in China demonstrates the significance of the ongoing protests because “usually censorship is swift and censorship is ubiquitous” in China, according to Lan.

“The fact that the people are really risking their lives to express their dissent within a totalitarian regime suggests how dire the circumstances there must be,” Lan said. “For us to be out here — it’s anything we can do to really stand in solidarity.”