Australia's public broadcaster interviewed a virologist who "played a key role in mapping the evolution of COVID-19" (and was also "the first...
View Post
Impact

SINGAPORE - Some over-the-counter medicine to treat fever, cough and cold are in short supply at pharmacies here, as more Covid-19 patients opt to...
View Post


Situation at a glance

On 4 July 2022, the Ministry of Health (MoH) of the Democratic Republic of the Congo declared the end of the Ebola virus disease (EVD) outbreak that affected Mbandaka and Wangata health zones, Equateur province. In accordance with WHO recommendations, the declaration was made 42 days (twice the maximum incubation period) after the burial of the last confirmed case who died in the community.

Description of the outbreak

The Ministry of Health of the Democratic Republic of the Congo declared the outbreak on 23 April after confirmation of Ebola virus  ina 31-year-old male (the index case) from Mbandaka, who had developed symptoms including fever and headache, and died on 21 April (for more details, please see the Disease Outbreak News published on 28 April 2022).

Four secondary cases, who had epidemiological links to the index case, were reported between 25 April and 19 May 2022. The last confirmed case was reported on 19 May. Of the five cases reported, four were males and one was a female, they were aged 9 to 48 years.

Figure 1. Confirmed and probable cases of Ebola virus diseases in the Democratic Republic of the Congo, reported 23 April to 3 July 2022 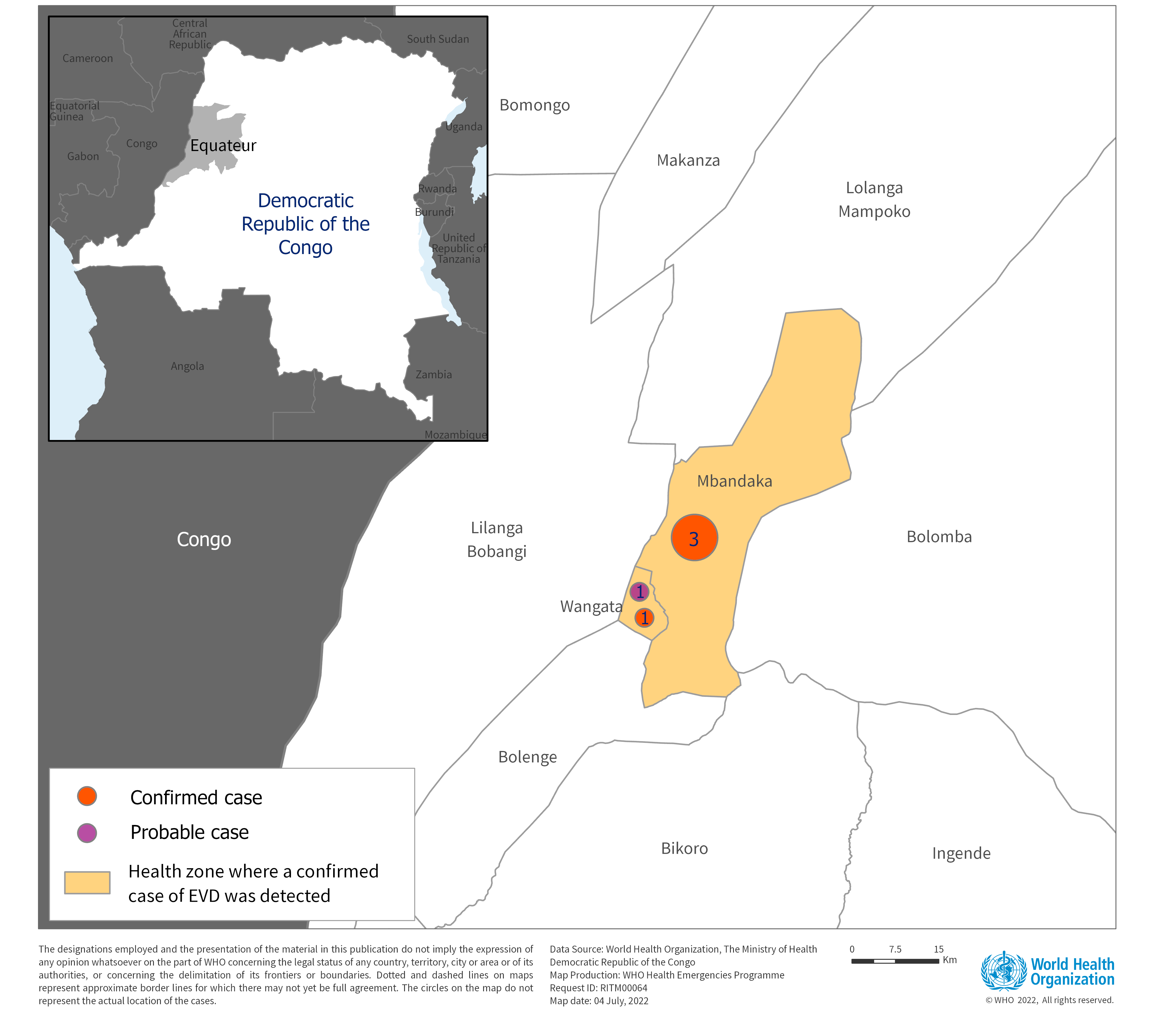 A total of 1076 contacts were identified around the five EVD cases and followed up for 21 days.

On 4 July 2022, the MoH declared the end of the outbreak, 42 days (twice the maximum incubation period) after the burial of the last confirmed case who died in the community.

Overall response: The MoH, together with WHO and other partners, initiated response measures to control the outbreak and prevent further spread. The MoH activated the national and district emergency management committees to coordinate the response. Multidisciplinary teams were deployed to the field to actively search and provide care for cases; identify, reach and follow-up contacts; and sensitize communities on outbreak prevention and control interventions.

Points of Entry: As of 2 July, a total of 647 874 travelers registered at 16 points of entry and points of control, of which 606 090 agreed to be screened for EVD. Among those who were screened for EVD, 279 alerts were notified, of which 262 were investigated in less than 24 hours. Among the 262 alerts investigated, 134 were validated as suspect cases. These 134 suspected cases were subsequently tested, and none tested positive for EVD.

Vaccination: Licensed Ervebo vaccines and matching injection devices were made available through two requests submitted and approved by the International Coordinating Group (ICG) on vaccine provision. Ring vaccination activities started on 27 April targeting contacts, contacts of contacts, and frontline workers. As of 3 July, 2104 persons in the affected health zones have been vaccinated against EVD, of which 1307 are frontline health workers.

Laboratory: A total of 999 samples have been tested for EVD since the onset of the outbreak, including five positive samples collected from four cases. Since 15 April 2022, 2000 Gene Xpert cartridges were made available to the Democratic Republic of the Congo through the global Ebola Xpert stockpile. A total of 835 GeneXpert cartridges remain in stock across the country, with 527 available at the laboratory in Mbandaka City.

Infection prevention and control: Infection prevention and control (IPC) interventions were implemented in health care facilities and the community to stop the spread of the disease. A total of 70 priority health care facilities were identified for assessment and supervision for improvement for IPC measures and dozens of community sites such as schools, churches and houses were decontaminated. Over 3000 health care workers were briefed on IPC measures and 60 triage centers were set up.

Clinical management: For case management, one Ebola treatment center (ETC) was rehabilitated, and seven transit centers, facilities with the capacity to isolate and care for suspected EVD cases before referral to ETC if cases were confirmed, were constructed for the management of suspected and confirmed Ebola cases. Specific EVD monoclonal antibodies were made available to treat confirmed cases in Mbandaka. In addition, standard care guidelines were developed and disseminated to improve care in the affected areas.

Operations support and Logistics: Although there is a need to further strengthen human resources for operations support and logistics (OSL) in the Democratic Republic of the Congo, the country’s OSL team responded swiftly to the outbreak by sending a cargo airplane from Goma to Mbandaka with supplies for EVD and ultra-cold chain equipment during the onset of the outbreak. In addition, the team initiated procurement for IPC kits, and has been actively involved in the rehabilitation of the Emergency Operation Center (EOC) and the ETC, and building transit centers. WHO deployed logisticians to support response operations.

The OSL team in the country organized the destruction of the used GeneXpert cartridges by rehabilitating the unique high-temperature incinerator in Equateur Province. The WHO standard Fleet Management System, including a Vehicle Tracking System on rented vehicles, was put in place for running the operation.

Additional key activities: Other activities were undertaken on the ground, including psycho-social support, and risk communication and community engagement (RCCE) actions to boost contact tracing and vaccination activities.

The response has faced challenges due to strike actions from local health workers and low adherence of some community members to public health measures.  Despite these challenges, public health response tools, including vaccines deployed in the early stage of the outbreak by the government with ICG approval and support from WHO and partners, may have helped to control the outbreak. Solving the strike and improving community adherence to public health measures remain critical and must be pursued. Efforts should be directed at learning from this response to improve response to future outbreaks of EVD.

The current outbreak of EVD in the Democratic Republic of the Congo is declared over, with no new cases reported for 42-days after the burial of the last confirmed case. This EVD outbreak was the third outbreak in four years in Equateur province.

WHO has noted that the current resurgence is not unexpected given the fact that Ebola virus is enzootic, present in some animal populations in the country and in the region. This means that the risk of re-emergence through exposure to an animal host or from persistent virus in certain body fluids of survivors, cannot be excluded.

Re-emergence of EVD is a major public health concern in the Democratic Republic of the Congo and there are still gaps in the country’s capacity to recover, to prepare for and respond to outbreaks. A confluence of environmental and socio-economic factors, including poverty, community mistrust, weak health systems, and political instability in some specific areas such as North Kivu and Equateur provinces may impact the timely detection and control of future EVD outbreaks. Moreover, the detection of outbreaks in recent years in the Democratic Republic of the Congo may also be explained by the strengthening of surveillance and detection capacity following successive outbreaks and the scaling up of the Integrated Disease Surveillance and Response (IDSR) strategy.

WHO considers that ongoing challenges in terms of access and security, epidemiological surveillance, coupled with the emergence of COVID-19, as well as ongoing outbreaks, such as cholera and measles, might jeopardize the country’s ability to rapidly detect and respond to a new outbreak.

Healthy Central Valley Together is now conducting COVID-19 wastewater testing in Davis    By SYDNEY AMESTOY — campus@theaggie.org   Davis residents, as well as residents in some...
Read more

Australia's public broadcaster interviewed a virologist who "played a key role in mapping the evolution of COVID-19" (and was also "the first...
Read more

Healthy Central Valley Together is now conducting COVID-19 wastewater testing in Davis    By SYDNEY AMESTOY — campus@theaggie.org   Davis residents, as well as residents in some...
Read more

Australia's public broadcaster interviewed a virologist who "played a key role in mapping the evolution of COVID-19" (and was also "the first...
Read more