Experts said the impact is far-reaching because formula is critical to an infant’s development if mothers cannot breast feed. And the Food and Drug Administration has specific guidelines on the manufacture of formula so that nutrients closely resemble a mother’s milk, making it difficult to duplicate with homemade sources.

Babies should consume four to six ounces of formula at each meal – breakfast, lunch and dinner – from birth to up to five months old, according to the U.S Department of Agriculture. From six months to one year, that consumption increases to six to eight ounces of formula per meal.

Infants generally stay on formula for the entirety of their first year. Parents begin adding baby food into their diets at about four to six months.

And many can’t spend the hours necessary to search store aisles or scour Facebook groups that have popped up to help families find formula because they work at jobs with little flexibility for personal time, she said.

Additionally, federal programs such as the Special Supplemental Nutrition Program for Women, Infants and Children — most commonly known as WIC — also restricts recipients to specific formula, which can limit their choices, French-Lee said.

“I understand that federal dollars are not unlimited, but I believe that in an emergency we need to allow parents who are on WIC to buy whatever formula is available,” she said.

Dr. Hugo Scornik, president of the Georgia chapter of the American Academy of Pediatrics, said he and his colleagues have been talking about this issue for months.

So far he’s been able to help all his patients find substitutes for the formulas they would usually use.

“It’s frustrating seeing mothers that can’t find the right formula for their babies. I do understand there are supply chain issues, but it is very frustrating.”

Scornik is concerned about questions he’s heard from moms of infants, including whether they can use cow’s milk instead. Some wonder if they should water down their remaining formula or make their own off the internet.

A baby formula display shelf at a store in San Diego, Calif., on May 10, 2022. The national shortage of baby formula highlights four larger problems with the U.S. economy. (Ariana Drehsler/The New York Times) 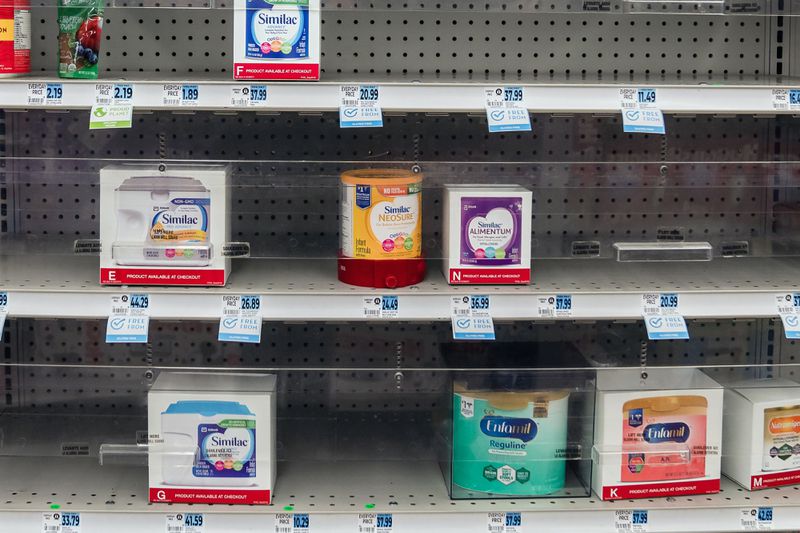 A baby formula display shelf at a store in San Diego, Calif., on May 10, 2022. The national shortage of baby formula highlights four larger problems with the U.S. economy. (Ariana Drehsler/The New York Times)

All three are a big no, Scornik said.

Different babies have different tolerances, but cow’s milk doesn’t work well babies younger than a year old, according to the Academy. Cow’s milk has proteins and minerals that can irritate infants, and for a rare few, it can be poisonous immediately. Cow’s milk also lacks important substances that all babies really need, such as enough iron.

Formulas often start with a base of cow’s milk, but the companies break it down, remove some parts of it and add ingredients it lacks. By the time it becomes formula, it’s different from unaltered cow’s milk.

For all infants, cow’s milk would be toxic if given alone long-term.

For mom Nayeli Lezama, 32, this week started in “panic mode.” She was down to just one can of formula to feed her two-month old daughter.

An immigrant from Mexico who moved to Atlanta just four months ago, Lezama had no established support system in the city to turn to for help. The stores she was familiar with had run out of formula. Amazon, the merchant where she had last been able to purchase a batch of cans roughly 20 days ago, was also out-of-stock.

”You get into this feeling of desperation,” she said, noting the stress was even keeping her up at night. “I didn’t think something like this could happen here.”

Lezama considered asking relatives to buy and send her cans of formula from Mexico. She took to posting calls for help on Facebook groups for Atlanta-area immigrants. Through connections made on those platforms, she was able to get her hands on five cans of formula, some of which are small and sample-sized.

”But that doesn’t matter,” she said. “Right now, every gram counts.”

Joy Woodson poses for a photograph with her three-month-old daughter Justice in her Lilburn home Friday, May 13, 2022. (Steve Schaefer / steve.schaefer@ajc.com) 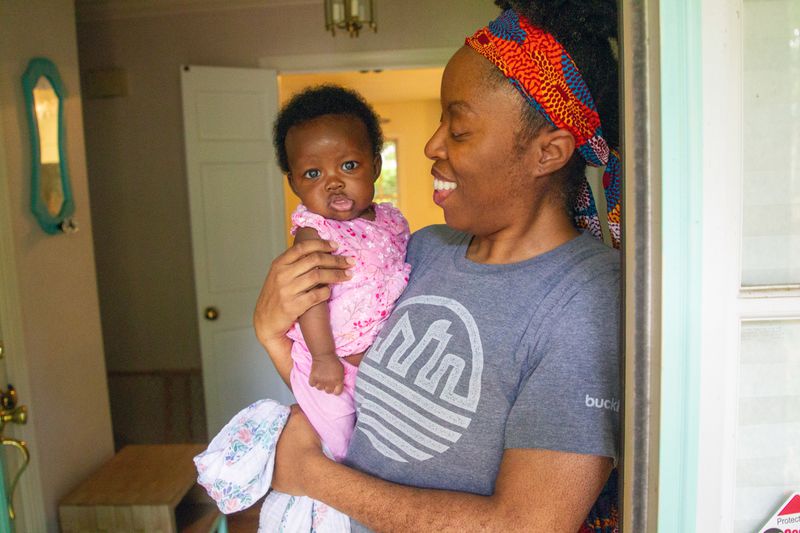 Joy Woodson poses for a photograph with her three-month-old daughter Justice in her Lilburn home Friday, May 13, 2022. (Steve Schaefer / steve.schaefer@ajc.com)

Woodson understands the desperation. On Friday, she took Justice for a check up with her pediatrician. The doctor said her daughter is in good health, but needs to gain slightly more weight, Woodson said.

“I’ve now been instructed to give her more formula per ounce of water, and this of course means I’ll run out quicker than I did before,” she said in an email from her pediatrician’s office. “The struggle never stops.”

The Associated Press contributed to this report.