China on Sunday reported 13,146 new coronavirus infections, the highest number since the peak of the first pandemic wave more than two years ago, as the country struggles to maintain its “zero-COVID” strategy.

Announcing the statistics, the National Health Commission said in a statement that “no  new deaths” had been reported despite the high number of infections.

Outbreaks of the disease, fueled by the highly transmissible omicron variant, have now hit more than a dozen provinces, with Shanghai the worst-affected region.

The city of 25 million, which has been under lockdown for days, has registered 70% of the national infection caseload amid mass testing. Thousands are in state quarantine, while health workers are reaching the limits of their capacity.

Vice Premier Sun Chunlan, who sits on the ruling Communist Party’s Politburo, urged “resolute and swift moves to stem the spread of COVID-19 in Shanghai in the shortest time possible,” the official Xinhua News Agency reported. 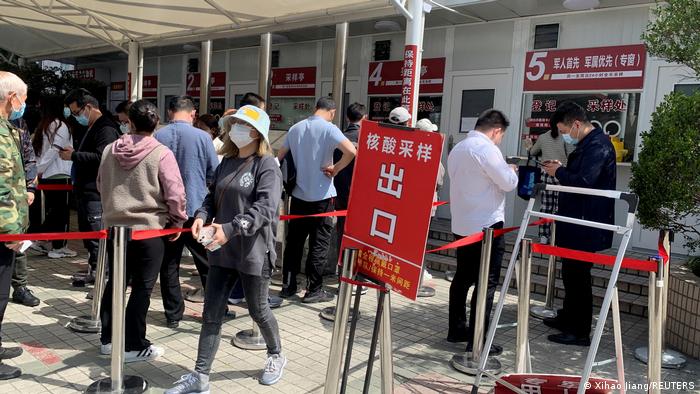 Mass testing has been enforced in Shanghai

What is China’s pandemic strategy?

China, the country where novel coronavirus was first detected in 2019, is among the last remaining countries to attempt to stop community transmission of COVID-19 as soon as it is detected, the so-called zero-COVID approach.

This has resulted now in Beijing imposing targeted lockdowns, mass testing and travel restrictions at a time when many countries are loosening their pandemic curbs.

Lockdowns in some form or other have affected tens of millions of people living in China over the past month, leading to considerable economic disruption.

Shanghai residents in particular are growing angry, as the lockdown drags on for longer than the four days initially envisaged, leading among other things to a shortage of fresh food.

Many parents also live in fear that they may be separated from their children under strict quarantine regulations.

The US, French and Italian foreign consulates have warned their citizens in Shanghai that family separations could occur as COVID curbs were enforced, according to notices seen by Reuters news agency.

State media have indicated that President Xi Jinping, who heads the country’s Communist Party, is behind the tough approach.

Xi is, however, also trying to prevent further harm to an already faltering economy, while also trying to maintain stability in the run-up to a key party congress scheduled for November.