ST. GEORGE, Utah — A week before school started in this sunny desert city, Mike Carr waited at the front desk of the...
View Post
Supplies

With the rise in COVID-19 cases in Maharashtra, another distressing news has surfaced from the state. A man died on the doorstep of hospital...
View Post
Vaccine

A North Texas man who allegedly threatened a prominent doctor over her support for COVID-19 vaccines has been charged in federal court, officials...
View Post


MILWAUKEE — Over the past year and a half, the scientific world has seen a steady flow of research updating what we know about the novel coronavirus, SARS-CoV-2, and how it affects humans.

What You Need To Know

Because the virus is so new, researchers are still grappling with many questions about its function. And because of the nature of the scientific process, no single study can completely answer those questions. Instead, new research is constantly challenging our understanding of the pandemic.

Here, we explore some recent studies that have shed new light on the virus.

Doctors could soon have another way to help those who catch a coronavirus infection: A pill developed by drugmaker Merck cut the chances that new COVID-19 patients would land in the hospital by around half, the company’s clinical trials found.

Merck reported that the drug’s efficacy did not seem to be affected by underlying risk factors like obesity, older age or heart disease — or by viral variants, including delta. The company said it plans to apply for emergency-use authorization from the FDA “as soon as possible.”

If it gets approved, Merck’s pill would be the first oral medication to help fight COVID-19, which could be a game-changer for access to treatment. Other currently authorized treatments, like monoclonal antibodies, turned up higher efficacy rates in trials — but they’re harder to administer since they have to be given through IVs or injections.

“Antiviral treatments, that can be taken at home to keep people with COVID-19 out of the hospital, are critically needed,” said Wendy Holman, chief executive officer of Ridgeback Biotherapeutics, in a press release.

Molnupiravir — which gets its name from Thor’s powerful hammer, Mjölnir — works by inserting errors into the virus’s genetic code to stop it from making copies of itself. Patients take a series of 40 pills over the course of five days. 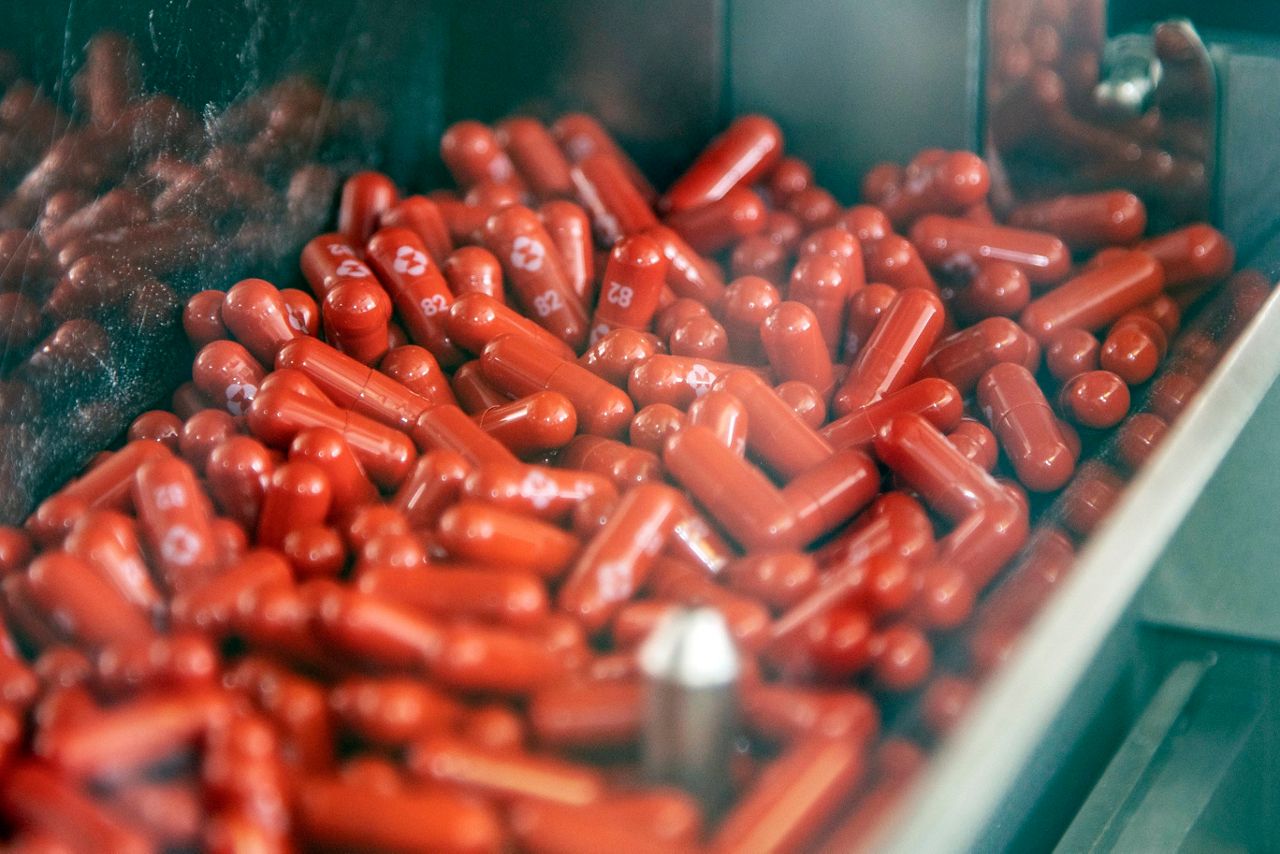 The antiviral medication tested by Merck to treat COVID-19. (Merck & Co. via AP)

Federal officials said that the 50% efficacy rate was “very good news,” but that vaccination is still key to prevent people from getting sick in the first place.

“The right way to think about this is this is a potential additional tool in our toolbox to protect people from the worst outcomes of COVID,” Jeff Zients, a White House coronavirus adviser, said at a briefing last week.

As kids across the country have returned to classrooms this fall, schools have been on very different pages about whether to require masks.

Now, a pair of recent CDC studies has found that those mask policies have made a big difference in COVID-19 spread.

In Arizona’s two biggest counties, schools that started the year with mask requirements saw a much lower risk of outbreaks, according to one study. Schools with no mask policies were 3.5 times more likely to have coronavirus outbreaks in their students and staff as the year got underway, the study found.

Out of 191 outbreaks linked to schools from July and August, the majority — around 59% — showed up in schools that didn’t require masks, the study found.

Only 8% of outbreaks happened in schools that required masks from day one. The other 33% came from schools that put mask mandates into place at some point after the year started.

A second study took a look at how school mask rules affected kids’ COVID-19 case rates in the surrounding counties. Researchers took a look at how pediatric cases changed in 520 counties across the U.S. following the return to school this fall.

In the two weeks after school got underway, counties with no school mask requirements saw COVID-19 cases in kids go up twice as fast as counties where schools required masks, according to the study.

Officials emphasized that especially since kids under 12 can’t get vaccinated against COVID-19 yet, masks are a key tool in preventing infections. The CDC’s K-12 school guidance recommends universal masking for students, teachers and staff — along with other measures like ventilation and testing.

“I would say that data actually absolutely show that masking decreases outbreaks in schools,” CDC Director Dr. Rochelle Walensky said last week, per CNN. “So with the purpose of keeping our kids in school, getting them in school, having them be safe, masks really are the way to go.”

Millions of high-risk Americans have already gotten a third dose of Pfizer’s COVID-19 vaccine to boost their immune protection against the virus.

For now, only Pfizer boosters have the green light from federal health officials. But extra shots of Moderna and Johnson & Johnson may be added to the mix soon, as the FDA’s advisory committee is set to discuss boosters for these other vaccines later this month.

Both companies have already said that another dose could help get to better and longer-lasting immune protection.

Last month, Johnson & Johnson published trial data showing that a second dose of its vaccine bumped up its global efficacy rate: The two-dose series was around 75% effective against any symptomatic COVID-19 and 100% effective against severe or critical disease, according to a J&J release.

For just the U.S. trial participants, that efficacy rate sat at around 94%, the company announced. That’s a significant jump from the original results, which found that one dose of the vaccine cut infections by around 66% globally and 72% in the U.S.

Booster doses also pumped up participants’ antibody levels against the virus, J&J announced. A second shot six months after the first led to a 12-fold increase in antibodies, according to the company’s release. 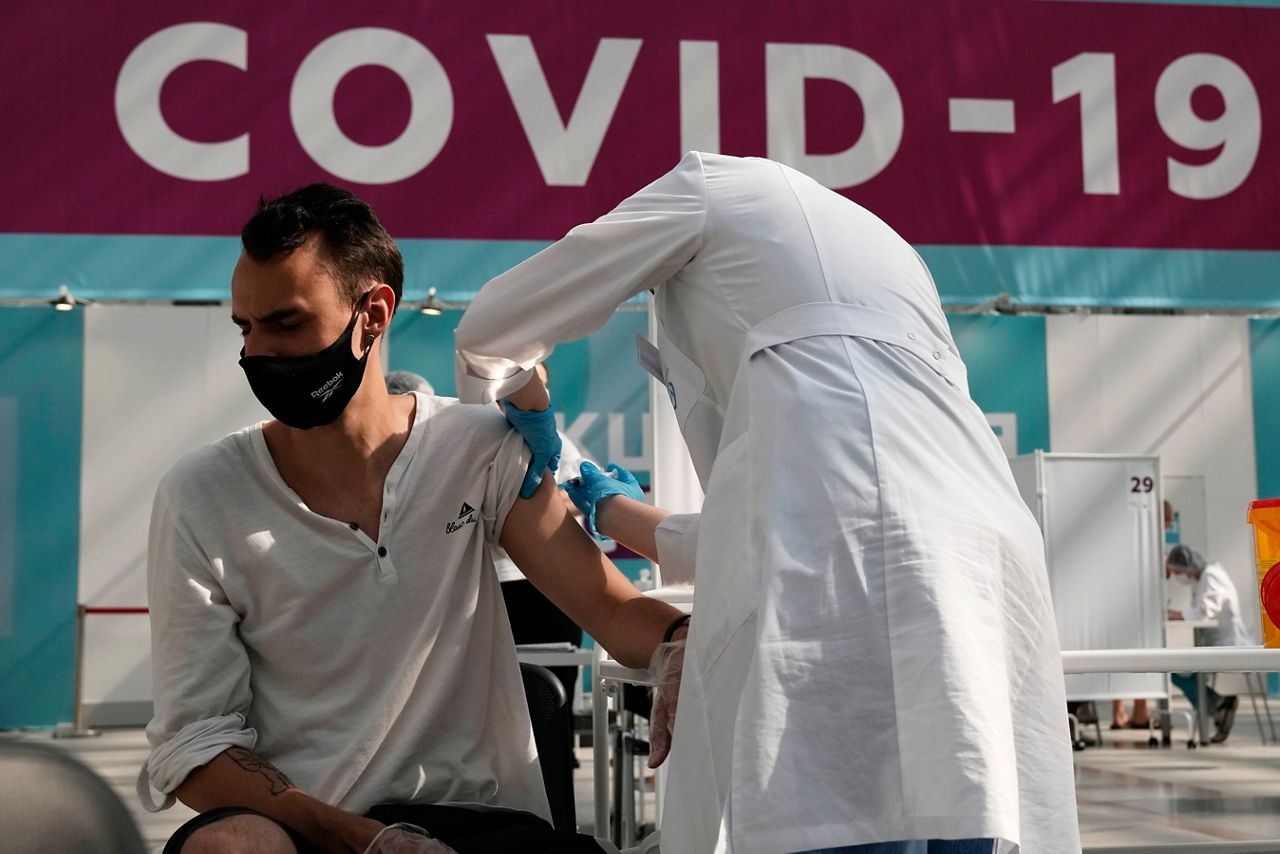 Antibody levels dipped in the six months after the initial vaccine series, the trials found, but a booster shot sent those levels back up to an even higher point than before. The higher antibody levels showed up across age groups, including older adults 65 and up, the release stated.

In a recent White House briefing, U.S. Surgeon General Vivek Murthy emphasized that getting guidance out for Moderna and J&J recipients was a “high, high priority.”

“Your health matters just as much as other vaccine recipients, and we want to make sure that your protection against COVID is strong and reliable as well,” Murthy said. “That’s why the FDA is working closely with Moderna and J&J to get and process their data as quickly as possible.”

Both clinical trials and real-world data have been clear: COVID-19 vaccines reduce the risk of catching the virus, and especially of getting really sick.

But so-called “breakthrough cases” among vaccinated people still happen. And with more shots in arms, a key question has become: Are the vaccinated still at risk of the long-haul COVID-19 symptoms that affect many who survive the disease?

Now, a large U.K. study has suggested that vaccination cuts the risk of long COVID-19 for those who catch the virus — in addition to slashing the risk of getting infected in the first place.

“We found that the odds of having symptoms for 28 days or more after post-vaccination infection were approximately halved by having two vaccine doses,” researchers wrote in the study, which was published last month.

The study looked at symptom data submitted through an app by millions of U.K. adults who had gotten vaccinated with Pfizer, Moderna or AstraZeneca shots.

Only 0.5% of adults who reported getting a first vaccine dose later reported testing positive with a breakthrough infection, the study found. And that share was even smaller for people who reported receiving both shots: Only 0.2% of them were later infected.

Some groups had a higher risk of catching a breakthrough case, the study found, including older adults, obese people and those living in lower-income areas.

These breakthrough patients were about half as likely to have long-term symptoms lasting beyond four weeks, compared to unvaccinated people who got sick, the study found. The vaccinated were also less likely to be hospitalized, or even report any symptoms, after their positive test results.

“Almost all individual symptoms of COVID-19 were less common in vaccinated versus unvaccinated participants,” the researchers wrote. “More people in the vaccinated than in the unvaccinated groups were completely asymptomatic.”

Other news to note:

ST. GEORGE, Utah — A week before school started in this sunny desert city, Mike Carr waited at the front desk of the...
Read more

With the rise in COVID-19 cases in Maharashtra, another distressing news has surfaced from the state. A man died on the doorstep of hospital...
Read more

ST. GEORGE, Utah — A week before school started in this sunny desert city, Mike Carr waited at the front desk of the...
Read more

With the rise in COVID-19 cases in Maharashtra, another distressing news has surfaced from the state. A man died on the doorstep of hospital...
Read more