BENGALURU, India (AP) — Since India opened vaccinations to all adults this month, hoping to tame a disastrous coronavirus surge sweeping across the...
View Post
Supplies

More than 30000 people have received the first shot of the Pfizer or Moderna coronavirus vaccine in the Scandinavian country since the end of...
View Post
Top News


Federal health officials on Friday evening lifted an 11-day pause on the use of the single-shot Johnson & Johnson coronavirus vaccine after an extensive safety review by the Centers for Disease Control and Prevention and the Food and Drug Administration. Shots could resume as early as today.

The officials said the benefits of the vaccine far outweighed the risks from a rare but severe type of blood clot. European regulators earlier this week made a similar decision.

“This is not a decision the agencies reached lightly,” FDA acting Commissioner Janet Woodcock told reporters.

CDC Director Dr. Rochelle Walensky added that the pause should increase confidence in vaccine safety, showing “that we are taking every one of those needles in a haystack that we find seriously.”

Dr. Jesse Goodman of Georgetown University closely watched Friday’s deliberations and said people should be made aware of the clotting risk but that it shouldn’t overshadow the benefits of covid-19 protection.

“We need to treat people as adults, tell them what the information is and give them these choices,” said Goodman, a former vaccine specialist at the FDA.

Most of the more than 210 million shots administered in the United States have been made by Pfizer-BioNTech and Moderna using a different technology.

The decision to lift the Johnson & Johnson pause allows state and local officials to resume giving the vaccine they have available, CDC officials said. The CDC and FDA will publish education and communication materials and updated patient fact sheets by early next week.

The agencies had paused use of the Johnson & Johnson vaccine last week because of 15 confirmed U.S. cases of blood clots among the 8 million people who had received the vaccine. All were women, most younger than 50. Three women died, and seven remain hospitalized.

CDC officials who presented the data Friday said that it was too early to conclude that the incidents affected only women and said a few cases in men were being reviewed.

[Video not showing up above? Click here to watch » https://www.youtube.com/watch?v=XzvzEhUWaCA]

The complication also has been seen, rarely, among people who received the vaccine developed by AstraZeneca and the University of Oxford, which uses a similar technology.

The announcement Friday followed an all-day meeting of an independent advisory panel to the CDC. The panel said the benefits outweigh the risks even as it heard about an additional small group of recipients who developed blood clots.

At issue is a weird kind of blood clot that forms in unusual places, such as veins that drain blood from the brain, and in patients with abnormally low levels of the platelets that form clots. Symptoms of the unusual clots, dubbed “thrombosis with thrombocytopenia syndrome,” include severe headaches a week or two after the vaccination — not right away — as well as abdominal pain and nausea.

The CDC’s expert panel, the Advisory Committee on Immunization Practices, voted 10-4, with one member abstaining. Walensky approved its recommendation.

The FDA and CDC said the agencies have confidence the vaccine is safe and effective.

The committee members agreed the vaccine “should be put back into circulation,” panel chairman Dr. Jose Romero, Arkansas’ health secretary, said after the vote. “The difference was how you convey the risk … It does not absolve us from making sure that people who receive this vaccine, if they are in the risk group, that we inform them of that.”

Woodcock said the agencies lifted the pause based on FDA and CDC reviews of all available data and in consultation with medical experts and based on recommendations from the advisory committee.

“We have concluded that the known and potential benefits of the [Johnson & Johnson] COVID-19 vaccine outweigh its known and potential risks in individuals 18 years of age and older,” she said in a statement. “We are confident that this vaccine continues to meet our standards for safety, effectiveness and quality.”

Walensky, in a statement, said the agencies “identified exceptionally rare events … and we paused to examine them more carefully. As we always do, we will continue to watch all signals closely as more Americans are vaccinated. I continue to be encouraged by the growing body of real-world evidence that the authorized COVID-19 vaccines are safe and effective, and they protect people from disease, hospitalization, and death.”

All the committee members said the benefits far outstrip the risks, but several members expressed concern that people receiving the vaccine will not be sufficiently informed of the potential danger or that there are other vaccine options.

“I voted yes, but I am concerned that consumers and women in this age group, in particular, will not be adequately informed just by the FDA [emergency use authorization] fact sheet,” said Beth Bell, a clinical professor in the department of global health at the University of Washington.

“This is an age group that is most at risk [of the clotting] that is getting vaccine predominately to save other people’s lives and morbidity, not their own. And I think we have a responsibility to be certain that they know this,” said Dr. Sarah Long of Drexel University College of Medicine, who voted against the proposal because she felt it did not go far enough in warning women.

Dr. Paul Stoffels, chief scientific officer for Johnson & Johnson, thanked the advisory committee for its “rigorous evaluation” and called it an “essential step toward continuing urgently needed vaccinations in a safe way for millions of people in the U.S.”

He pledged that the company would work with U.S. and global authorities “to ensure this very rare event can be identified early and treated effectively.”

The rarity of the cases had persuaded many federal officials that the complication can be addressed by adding a warning that describes the groups at higher risk for the adverse event, and by working to ensure that doctors know how to identify and treat the problem.

People who have received the Johnson & Johnson vaccine and develop severe headaches, abdominal pain, leg pain or shortness of breath within three weeks should contact their medical provider. Most notably, physicians are advised to avoid using the anticoagulant heparin, a common treatment for blood clots, because it can exacerbate the vaccine-related condition.

One reason for the pause was to alert health officials to use similar non-heparin drugs and intravenous immunoglobulin.

Experts have said the risk of developing a clot after receiving the vaccine appears far lower than the chance of a clotting issue caused by a severe covid-19 infection or from using hormonal birth control, such as oral contraceptives.

Peter Marks, director of the FDA’s Center for Biologics Evaluation and Research, said officials want to “find the sweet spot where people have the information they need to make an informed choice on benefits and risks… . The way the FDA is seeing it, the overall benefit and risk here remains favorable.”

The Johnson & Johnson vaccine, which was authorized for adults 18 and older, is a large part of the U.S. and global vaccination strategy. It has clear practical and logistical advantages over the other two authorized vaccines in the United States: In addition to requiring just one dose, it does not have to be kept frozen.

That makes it particularly useful for rural areas and other hard-to-reach communities, and for distribution to community health centers and physician offices that might not have the freezers needed for the other vaccines, public health officials say.

Pregnant women confused by conflicting recommendations regarding coronavirus vaccination over the past few months now have clear guidance from the CDC: Get the shots.

At a White House briefing Friday, Walensky of the CDC said vaccination surveillance systems showed “no safety concerns” for more than 35,000 women in their third trimester or for their babies.

“We know that this is a deeply personal decision,” she said, “and I encourage people to talk to their doctors and their primary care providers to determine what is best for them and for their baby.”

Walensky said that because the initial vaccine trials did not include pregnant women, there had been limited data on possible problems. As a result, different health authorities and professional medical groups had offered cautious, or even conflicting, guidance.

The CDC had previously suggested that pregnant women make their decisions in consultation with their doctors. The American College of Obstetricians and Gynecologists said coronavirus vaccines “should not be withheld from pregnant individuals,” but stopped short of explicitly recommending the shots for that population.

In contrast, the World Health Organization had said that only pregnant women at a high risk of contracting the virus or of having severe covid-19 should be vaccinated.

But peer-reviewed data from several national surveillance systems presented in early March and published Wednesday in the New England Journal of Medicine supported an optimistic outlook, even as researchers urged further study.

The information on thousands of pregnant women taken from the CDC’s Safe App and the Safe Pregnancy Registry, as well as the vaccine adverse event reporting system, between Dec. 14 and Feb. 28. showed they experienced side effects similar to those observed in the rest of the population — mostly minor symptoms such as pain at the injection site, headaches, chills and fever.

Information for this article was contributed by Lena H. Sun, Carolyn Y. Johnson, Laurie McGinley and Ariana Eunjung Cha of The Washington Post; and by Lauran Neergaard, Mike Stobbe and Matthew Perrone of The Associated Press. 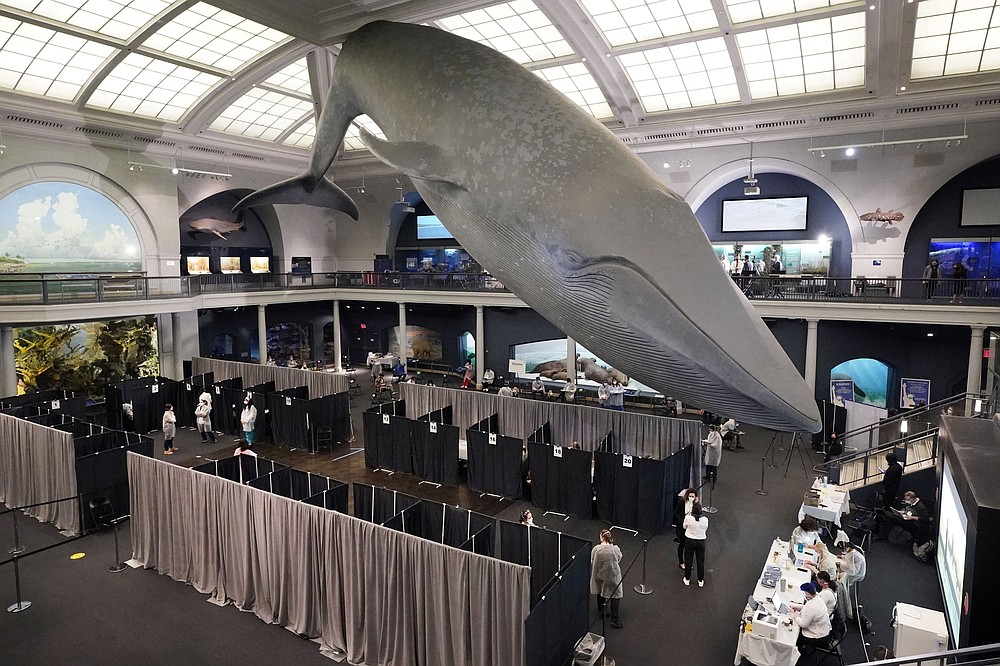 Vaccination cubicles were set up Friday under the 94-foot-long, 21,000-pound model of a blue whale in the Milstein Family Hall of Ocean Life at the American Museum of Natural History in New York.
(AP/Richard Drew)

BENGALURU, India (AP) — Since India opened vaccinations to all adults this month, hoping to tame a disastrous coronavirus surge sweeping across the...
Read more

More than 30000 people have received the first shot of the Pfizer or Moderna coronavirus vaccine in the Scandinavian country since the end of...
Read more
Load more

BENGALURU, India (AP) — Since India opened vaccinations to all adults this month, hoping to tame a disastrous coronavirus surge sweeping across the...
Read more

More than 30000 people have received the first shot of the Pfizer or Moderna coronavirus vaccine in the Scandinavian country since the end of...
Read more
Load more